Have you spent much time thinking about steampunk this week? I know I have, and so has the phenomenal artist featured here today, Scarlett Algee.

Deciding what I like most about Scarlett is difficult. It might be the clockwork pendants, the brass necklaces or the brass blood earrings(you'll have to check out her website below if you want to see that last one). Or it might be the fact that she was a pleasure to work with.

Please give Scarlett a warm welcome.


1. How did you discover steampunk?
My first encounter with steampunk was actually the PC game Arcanum. I wasn’t really sure what steampunk was at the time--I don’t think I’d actually heard the term--but there was something in that mix of tech and Victoriana that spoke to me. My first encounter with steampunk after I became familiar with the term was S. M. Peters’ novel Whitechapel Gods, which remains one of my solid favorites.

2. Why do you think steampunk has grown so popular over the last few years?
At some point, steampunk as a literary genre became steampunk as a fashion subculture, and as such, it’s much more visible. When I browse the steampunk groups I belong to on Facebook and Google+, the images of crafts and jewelry are vastly outnumbered by drawings, paintings, and cosplay images. When steampunk stepped past the bounds of “Victorian science fiction” and entered the realm of “fashion statement,” it became much more real, on a visceral level, to many more people--myself included.
To draw on steampunk’s historical basis, the Victorian era saw significant leaps in science and technology, much like current American society. I think that’s another reason steampunk and its trappings--gears and cogs, clocks and compasses--are gaining popularity. They’re a representation of the human drive towards progress.

In the beginning, it was sheer practicality. My father died in 2012, and I spent part of that year ill and in hospital, so I had to give up my job--but I still needed to pay the bills. A dear friend of mine, who knew of my love of Victorian history and fiction and my beginning interest in steampunk, pointed me toward Etsy and its many, many steampunk-themed listings, and said, “Look, you can do this.” I spent a few months learning jewelry-making basics and collecting supplies, made my first sale in May 2013, and I haven’t slowed down.

4. How long does it typically take to create a piece?
Oh, it depends. Earrings are easiest--I can make a pair of earrings in fifteen minutes. For a bracelet or necklace, if the design is clear in my head, that’s about an hour of work. If epoxy is involved, as when I’m working with cabochons or layered metal pendants, it’s an hour of construction plus about three days for the glue to bond permanently. I do create custom pieces, and those take the most time by far. You have to have regular communication with your buyer, keep them updated on every little change. Turnaround time on custom jewelry, for me, is about three to seven days.

5. Out of all the steampunk pieces you've created, which one is your favorite?
All of them! But if I had to pick one in particular, there’s a pocket watch-style necklace in my Etsy shop called “Timelock”. It’s the most expensive piece I’ve created, and I spent about two weeks waiting for all the parts to arrive, but it allowed me to combine some challenging elements: a watch casing, a clock face, a few gears, an antique map scrap, an old postage stamp. I was even able to work in real vintage pocket-watch winding keys, which I think provide a nice touch.

6. Who's your favorite steampunk artist? 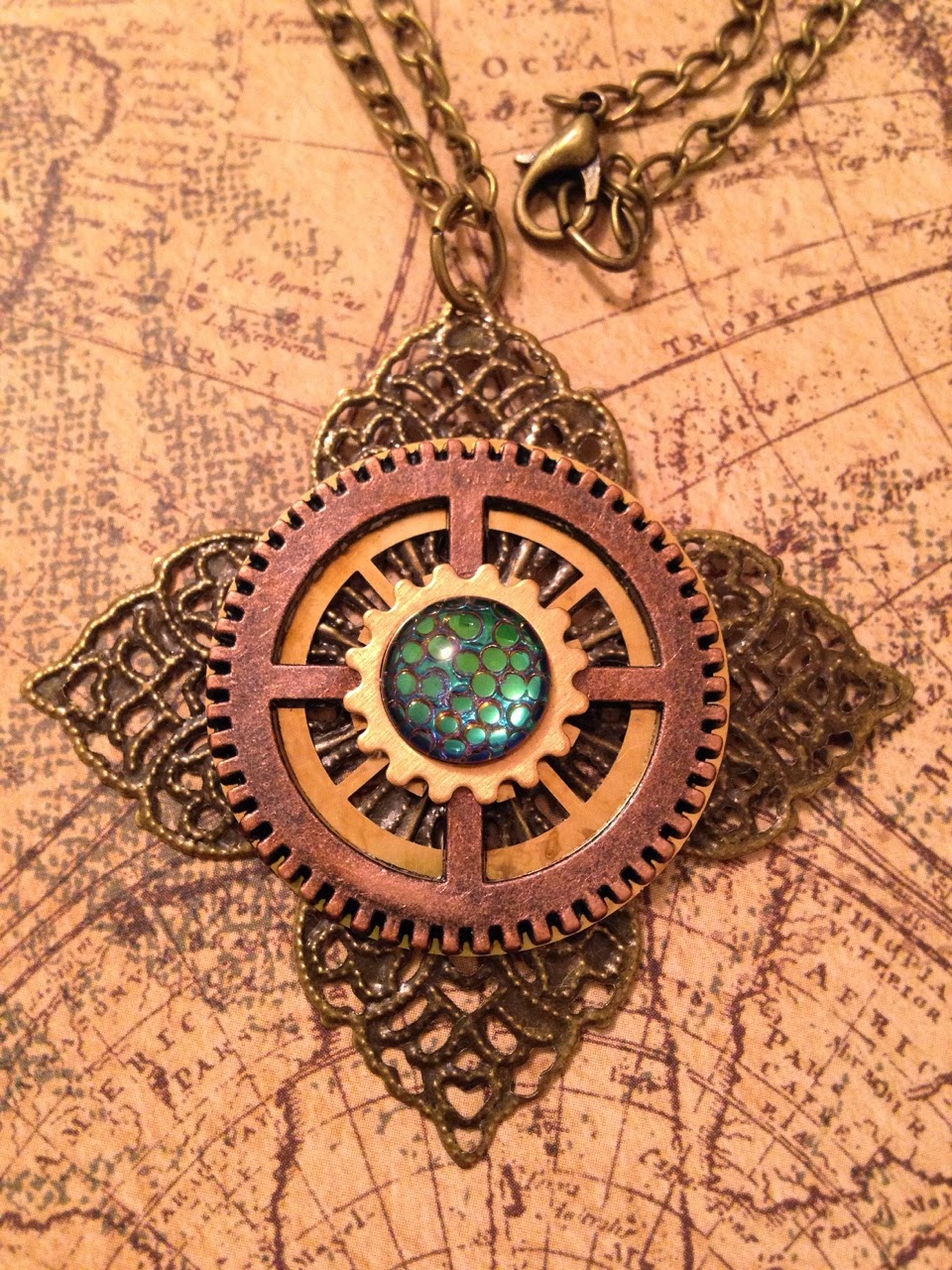 Hands down, Justin Gershenson-Gates of A Mechanical Mind. Not only does he craft exquisite clockwork pendants, but he uses things like watch parts and automotive light bulbs to make the most amazing sculptures I’ve ever seen. I’m especially fond of his spiders and insects, they’re just gorgeously delicate.

7. Are you working on anything exciting right now?
I’m always working on something. I’ve started working with cameos; right now I’m working out designs for new necklaces, and making plans to add cufflinks and hairpins to my shop listings. I also write in my spare time; I’m in the process of turning two “steampunk light” short stories into ebooks, I’m on the sixth draft of a novella with steampunk elements, and Sanitarium Magazine has just picked up a horror story of mine that’s a sci-fi take on Jack the Ripper, with a planned release date of January 20th. I’m definitely keeping busy!

You can find Scarlett at Copperwalk Designs.
Posted by Unknown at 12:27 PM 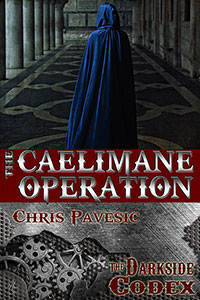 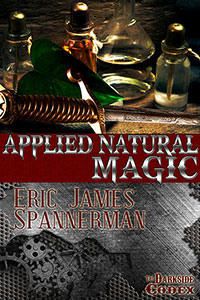